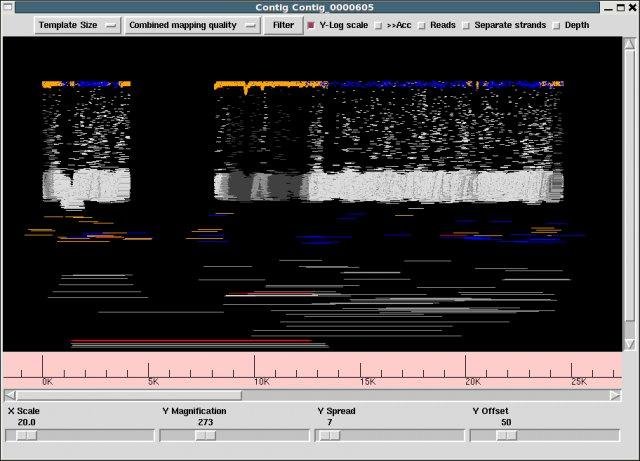 * Find Haplotypes function for use within the contig editor. This
replaces the old Sort By Sequence mode as well as generating lists
of read IDs per haplotype. It also creates a master "haplotypes"
list of lists.

* Disassemble Readings now handles list of lists (in addition to
normal lists of readings), for use with the haplotype output.

* Improvements to Shuffle Pads. It can now use cutoff/soft-clip
data to detect concordant soft-clips (regions where all the
soft-clip data agrees with one another). It auto-detects likely
adapter sequences to avoid extending these.

It also now detects short tandem repeats and handles these more
carefully. An STR overlapping a heterozygous indel can be clipped
back if the read doesn't span the entire STR, in order to not cause
bias in the copy numbers.

* The Realign Selection option now brings up a user interface if invoked
from the main menu, but not when right clicked via the popup menu
(unless Control key is held down while right-clicking).

* Export Contigs has an additional depadded option to use original
reference sequence coordinates. Note this isn't 100% robust as it
depends on which edits have happened, in particular joining and
breaking contigs.

* Export SAM, BAM and CRAM should now be much faster in excessively
deep regions with soft-clips.

* Improved the consensus discrepancy score by taking into account a
per-base difference rather than joining all together.

* The current selected reading list in the Contig Editor now shows the
number of items in that list.

* The consensus algorithm has been tweaked to cope with different
overcall and undercall likelihoods. This is tied to sequencing
technology, for which the default can be adjusted in the Options
menu. This uses the @RG "PL"atform heading in BAM files. The List
Libraries window permits editing of this field after import.

* The Template Display now has hot-keys for configurations. Use
Shift-Function-Key to remember the current settings and Function-Key
to switch to that setting. The File -> Save Settings option will
write these to your ~/.gap5rc.

* Fixed a bug where using the contig selector / contig list to fill
out a dialogue box without then doing anything else at all could
cause the name to be considered invalid.

* Removed used of some unintialised data in Shuffle Pads.
- Validate_clip_regions could process annotation record numbers that
have been removed already.
- Functions setting sequence clip points could potentially set clips
beyond the sequence ends.

* Fixed a bin corruption caused by updates to read pairs spanning two
contigs, eg with one editor open on each end. (See r3996 for the
long description.)