Windows 10 is now on more than 1 billion devices worldwide, Microsoft said in March. Now that support for Windows 7 is officially over, Microsoft is encouraging people to either upgrade their PC to Windows 10 to keep it running smoothly and securely or to buy a new computer. 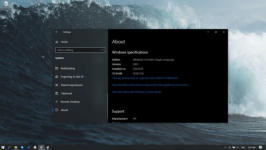 Windows 10 21H1 New Features:
The upcoming version of Windows is expected to bring in some new features, as well as remove a few. The update is said to be minor as it will only be an enabling update. This means that the Windows 10 21H1 update will only enable certain features that are already hidden away in the 20H2.

Disk management and Optimize Drives options in the Settings app
With the installation of Windows 10 21H1, the Disk Management configurations have been duplicated in the Settings application. The system disk was previously only manageable through the Control Panel.

Task Manager displays process architecture
The “Details” tab in the Task Manager now also displays the architecture of the process in which it is run, for example, x86, x64, or ARM. This feature is especially useful for ARM systems.

Built-in storage health monitoring
Microsoft is also working on incorporating a built-in feature in Windows so that users can monitor the health of their storage devices (hard drives) before they actually fail. This will help you avoid any sudden crashes so that you are not worried about losing your data or recovering it from a broken device.

I need this window for multi integrated applications

your are providing good services.

Windows 10 is terrific!!! Glad I upgrade! Didn't have many problems. Faye