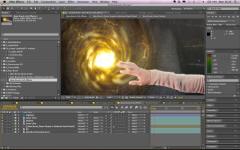 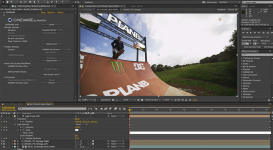 Real 3D inside After Effects. See it to believe it.

A live 3D pipeline with Cinema 4D means you can import 3D objects and use them in 3D scenes in After Effects. No re-rendering. No waiting. Just more creating.

Get a sneak peek at our next release.

Check out the new features coming to After Effects, including Uninterrupted Preview to iterate and make adjustments without stopping playback, Creative Cloud Libraries to access and share your creative assets, and Face Tracker to apply effects to a face with exceptional detail and accuracy.

Adobe After Effects CC includes a fully integrated 3D pipeline between After Effects and Maxon Cinema 4D Lite that motion graphic artists and animators can use to insert 3D objects directly into an After Effects scene without pre-rendering passes or complicated file exchanges.

Refined user interface with HiDPI support
A simplified UI puts the focus on your projects and delivers a more consistent experience across devices, including HiDPI Windows 8.1 displays.

Improved Adobe Anywhere collaboration
Collaborate on compositions and productions with other After Effects artists without worrying about what to name files or where to store them. Version tracking and project sharing features make remote workflows a breeze.

Live Text Templates for Premiere Pro
Package your After Effects compositions as Live Text templates so Premiere Pro editors can change the text without changing the text color, motion, or lower-third background.

Flexible masking options and Premiere Pro Interchange
Use masks to apply effects to specific areas of your compositions — no need for additional adjustment or track matte layers — and blend each effect individually into the original layer. Import masks from Premiere Pro via Dynamic Link for further refinement.

Media Browser enhancements
Navigate your media locally or across a network via Adobe Anywhere, and access complex media types like P2 and XDCAM as media, not as nested folders.

Typekit integration
Access a variety of fonts from Typekit for immediate use in your After Effects projects.

Panel integration support
Find and install plug-ins, extensions, training media, and other content via After Effects panels created by the developer community.

And so much more
Also includes: Faster performance in the Warp Stabilizer VFX effect; the ability to import Sony RAW footage from F5, F55, and F65 cameras; scripting access to render settings and output module settings; and more.